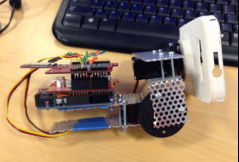 For our first prototype, we used strips of aluminum to connect the servo actuators. We screwed each of the servo bodies between two of these aluminum pieces. One of the strips was bent into an L-shape in order to couple the movement of the servos. Finally, we attached the phone to the servo mount using a 3-D printed phone case with custom holes to mount the servo. 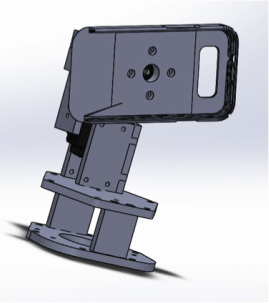 The final prototype that we made had the same overall layout as the previous design. One major change was that additional pieces of acrylic were laser cut in order to completely house the servos. This design choice was purely for aesthetic purposes. A second change was the base of the device. In order to mount the device to the motorcycle we were using for testing, the base had holes that aligned with screws on the top of the fuel tank of the motorcycle. This allowed for easy but secure mounting. Additionally, we 3-D printed a second version of the phone case as well as a case for the GoPro.

As shown in the images below, there are two different configurations in which the device can be used. The first (shown in the bottom left image) is where the phone is externally mounted and the GoPro is used to take the video. The second configuration (shown in the middle and right images below) is where the phone is being used to both stabilize the device, as well as to take the actual videos. This gives the user the option to take stabilized video even without owning an external camera such as a GoPro.

There are several changes that we would look to incorporate into the next version of our device. First, our current device has two degrees of freedom since this was ideal for our application (motor cycle riding). However, we would look into designing versions with three degrees of freedom as well. Next, we would make a more universal mounting mechanism, such that the device could be used for mountain biking, skiing, quadrotors, etc.
Powered by